Whew... I fell behind on blogging for a bit.  School started for Coop.. he is a big-time first grader as of yesterday.  We said goodbye to summer with a bang last week and went on all kinds of fun adventures around town.  Now, it is back to reality... and cooking! 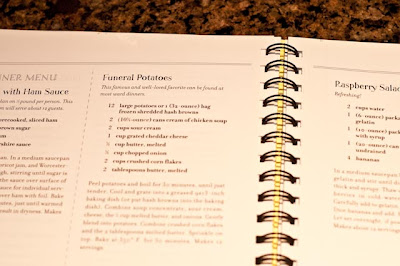 I was intrigued by the name of this recipe, and I also love anything with potatoes as an ingredient.  I decided to ask my mom about the name... did she know where it came from?  My thoughts were that maybe you felt like you were dying after you ate suck a heavy dish... kind of like you were on the way to your own funeral.  She says though that this potato dish is easy to make, can feed a lot of people, and is readily available anywhere food is served... funerals, reunions, family dinner tables, etc. 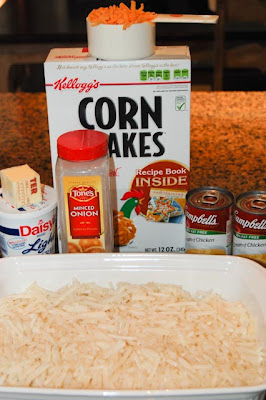 The ingredients are simple, as is the preparation.  It smelled yummy in the oven, and we were excited to try it.  At first bite, it had potential... only to be followed by disappointment.  The flavor was very bland.  Maybe because the recipe calls for no salt or pepper.  My parents (whom ate over that night) thought it might have been due to the fact that I used low fat cream of chicken soup and low fat sour cream. 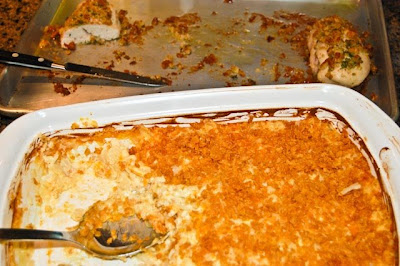 As we were eating, my mom asked me if I remembered the potato dish I made last year for Christmas breakfast.  I did remember once she mentioned, and it was very similar to this recipe, but much, much better in flavor.  Everyone raved about it.

I doubt I will make this version again.  It wasn't horrible, but not worth a second shot.  I will however, make my version again, probably for Christmas.  I will share both recipes, and you can decide for yourself!

Note: I usually turn the oven up to 400 at the end to brown potatoes.

Posted by Cookbook Confessions at 9:36 AM

Email ThisBlogThis!Share to TwitterShare to FacebookShare to Pinterest
Labels: side dishes, The Essential Mormon Cookbook